The revolution continues in the transformation of our world, courtesy of the internet. One key technology is the 3d printer, which will open up new worlds by lowering the cost of many goods, speed the delivery of those goods into everyone's hands, and increase the creative options to enable ideas to become reality.

Some current 3d printers use the technique MakerBot and Da Vinci printers employ -- rolls of plastic wire that are then melted, piece by piece, and deposited as tiny dots to create objects. The resulting pieces can be light and strong, but their surfaces show a characteristic banded texture and the resolution is limited; the overall impression is crude. The so-called "printed gun" uses a much more sophisticated -- and expensive -- type of plastic dispensed from an industrial 3d printer.

One model that may emerge -- a bifurcated system, where the combination of 3D printing and manufacturing produces a low-end “Less Expensive, Less quality” model, where manufacturers focus on rapid iteration wth localized facilities, and a high-end “Premium” model, where groups provide product ideas and social capital to facilitate small businesses and local creativity.

Certainly the surface of the full gamut of possibilities of 3d printing are only being scratched. The people's gun is one area -- societal boundaries pushed. Another could be in terms of scale. With this device, you can "print" a house in 24 hours. 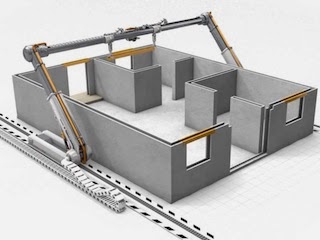 Created by Professor Behrokh Khoshnevis from the University of Southern California, this new giant 3D concrete printer can build a 2,500-square-foot house in just 24 hours, layer by layer. The giant robot replaces construction workers with a nozzle on a boom (pumping concrete from trucks), which squirts out concrete and can quickly build a home based on a CAD drawing.

For this author, it is not too difficult to imagine entrepreneurs or local small businesses competing with Ford or Kia to disrupt broad markets, such as for the automobile. The same holds true for other industries, such as consumer products or engineering. Don't underestimate the creativity of the motivated business person.
Posted by Tom Termini at 10:17 AM