Without a crystal ball, Sir Arthur C. Clarke came up with predictions of the future. The British science fiction writer (he wrote 2001: A Space Odyssey after the film, actually), was able with astonishing accuracy, to envision a future of remote work in 1964. In a segment from the BBC Horizon program, Sir Arthur Clarke leads the video with the sentence, “Trying to predict the future is a discouraging, hazardous occupation … ” But the science fiction writer, inventor, and undersea explorer did just that. Here are some of his predictions regarding the world—and in particular, the future of the workplace. Here's the program...

Posted by Tom Termini at 8:45 AM No comments:

Why We Should All Advocate for Wokeness

Awareness of unfairness in the treatment of others -- the definition of the slang term "woke" -- not only makes the world a better place, it makes all of us better people. By being aware of systemic racism and bigotry, we could build a culture in which the marginalized receive empathy instead of disdain.

Being “woke” is, according to Merriam-Webster, “aware and actively attentive to important facts and issues (especially issues of racial and social justice).”

Originally slang used by Black Americans, the word became part of the national lexicon in the past few years. But its meaning has already changed, and there is a divide in how the word is perceived, a divide that is both political and generational. 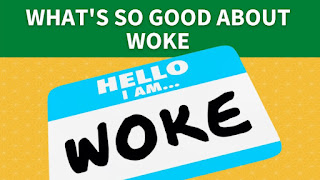 We should reflect on Nietzsche's admonishment: “Whoever fights monsters should see to it that in the process he does not become a monster.” Power theory teaches us that every system develops a subsystem that initially makes rules that are good for the system, but, eventually, that governing subsystem makes rules that are good for itself. George Orwell ended Animal Farm with the disgusting image of pigs imitating their human oppressors.

We can become more "woke" without becoming authoritative. The impulse for humans to mistreat each other is deeply rooted in our history.

The analogy between mistreatment of others and mistreatment of ourselves also applies to Christians and Jews. Many Christians, historically, knew it was wrong to persecute Christians because of their religion, but they missed the analogy to mistreating Jews because of their religion, not because they believed the Old Testament had been replaced or because they blamed Jews for the Crucifixion, but because the “righteous indignation” that Christianity offers in the story of the Crucifixion depends on missing the analogy.

Hate cannot stand up to analogized, contextualized empathy, which is why Critical Race Theorists organized their scholarship around storytelling. Hate requires the obliteration of context. This is well-known to trial lawyers. When juries decide whether to impose the death penalty, defense attorneys present evidence concerning their clients’ difficult childhoods.

What we see happening with the term “woke” is similar to what happened to the term “political correctness,” from the 1980s and in the 90s by the left. The term was always a bit tongue in cheek, but it was serious in that people wanted to respect diversity, to respect the political differences that exist. However, as soon as people who did not share that ideology started using it, it became pejorative.

Critical Race Theory and antiracism focus on changing formal and informal policy rather than on aiming to identify who not to hate.

Tetra Aviation is preparing its Mk-5 eVTOL Aircraft for flight in 2022. The lightweight electric aircraft is designed for single-person use and is crafted from a combination of aluminum and carbon-fiber-reinforced polymers, with the prototype measuring in at prototype measures at 28 feet wide, 20 feet long, and 1,000 pounds, A total of 32 vertical lift rotors across four wings lift the plane, while horizontal thrust propels it forward.

See more over at... their site

Posted by Tom Termini at 9:03 AM No comments: