Songwriter Tom Lehrer became a star in the 1950s and '60s writing and performing satirical songs that skewered just about everything... Lehrer, 92, announced via his website that he's effectively putting everything he ever wrote into the public domain. That means his lyrics and sheet music are available for anyone to use or perform, without having to pay royalties or lawyers... [Most of Lehrer's music "will be added gradually later with further disclaimers," according to Lehrer's web site.]

Lehrer is giving up royalties, but in exchange, he is giving his work a boost. Siva Vaidhyanathan, a media studies professor at the University of Virginia, suggests, "Lehrer, in this case, is basically saying, 'Hey everybody, come revisit my material, come do with it what you want,'" he said... That could mean we'll be hearing more of Tom Lehrer's work, said Jennifer Jenkins, who runs the Center for the Study of the Public Domain at Duke Law School. "There is empirical research showing that when material enters the public domain, it actually gets used more," she said.

Lehrer's lyrics touched on geeky subjects including nuclear weapons, Wernher von Braun, and one song where he set the names of the chemical elements to a tune by Gilbert and Sullivan.

Wikipedia reports Lehrer "largely retired" in the 1970s to become a mathematics teacher at the University of California, Santa Cruz (also teaching the history of musical theatre). In that decade he also wrote ten songs for The Electric Company, an educational TV show about reading broadcast on America's public television, singing two of the songs himself — L-Y and Silent E.

Posted by Tom Termini at 4:57 AM No comments:

Think Creatively How to Incorporate AI into You Strategy

Over at the Financial Times, a panel discussed the realities of AI — what it can and cannot do, and what it may mean for the future. AI was defined as “any machine that does things a brain can do.” Intelligent machines under that definition still have many limitations; we are a long way from the kill-bot cyborgs from the Terminator.

Machine intelligence is not likely to replace humans in the near future -- but it will continue to evolve as a valuable tool. Because of developments in neural technology and data collection, as well as increased computing power, we can use a.i. to augment many human activities. And streamline repetitive manufacturing processes. Such machine intelligence will continue to increase capability to perform routine tasks involving language and pattern recognition, as well as assist in medical diagnoses and treatment. Used properly, intelligent machines can improve outcomes for products and services.

"...professional services, law firms have applied language recognition to assess contracts, streamline redaction and sift materials for review in litigation cases, as well as to analyse judgments. The London firm Clifford Chance notes, however, that the facilitation of processes does not yet “transform the legal approach”.

Prof Susskind says: “I am in no doubt that much of the work of today’s lawyers will be taken on by tomorrow’s machines.” This could have major implications for how lawyers are trained and recruited.

It should be obvious that organizations should be thinking creatively about how to incorporate a.i. into their strategies. 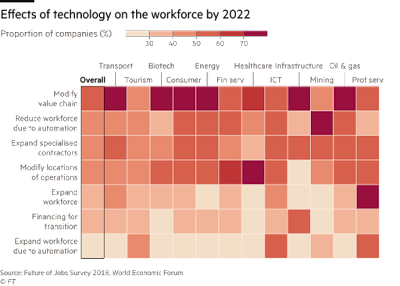 Posted by Tom Termini at 2:57 AM No comments:

Quantum Computers are Good at Randomizing -- so how about a service for that?

A new commercial endeavor offers up progress in the devilishly complicated field:

Last week, Cambridge Quantum Computing announced the first commercial, verifiable quantum random generation number service designed to run on an existing IBM quantum computer. Initially, the service will only be available to the 100 or so corporate and academic members of IBM’s Q network but it will be open to other users later this year. Its first applications are likely to be for cryptography, material science, computer games, insurance and options pricing.

Read more at over at the FT...

Posted by Tom Termini at 1:53 AM No comments:

Influential thought leader Roger Cochetti is concerned about the impact of governments asserting control over the internet within their borders. Mr Cochetti was an internet public policy expert for IBM in the early 1990s and later served as Senior Vice-President & Chief Policy Officer for VeriSign and Group Policy Director for CompTIA.

Over at SlashDot, we read about the balkanization of the global information superhighway. One needs to recognize that — by most any measure — the global internet is controlled by businesses and non-profits subject to the jurisdiction of the United States government. Within a roughly 1,000-mile strip of land stretching from San Diego to Seattle lie most major internet businesses and network control or standards bodies (and those that aren't there likely lie elsewhere in the United States). So — as the governments of China, Russia and Iran never tire of explaining — while Americans constitute around 310 million out of the world's 4.3 billion internet users (around 8%), the U.S. government exercises influence or control over more than 70% of the internet's controls and services

The first major step in the introduction of a new, China-centric internet may have taken place last year when China introduced to the UN's International Telecommunications Union a proposal for a new type of protocol that would connect networks in a way comparable to, but different from, the way that the internet protocols have done. This was quickly dubbed China's New IP, and it has been the subject of major controversy as the nations and companies decide how to react. Whether a new Chinese-centric internet is based on a new series of protocols or is simply based on a new set of internet domain names and numbers, it seems likely that this alternate internet will give national governments quite a bit more control over what happens within their territories than does the global, open internet. This feature will attract quite a few national governments to join in — not least Russia, Iran and perhaps Turkey and India.

The combined market power of those participating countries would make it difficult for any global internet business to avoid such a new medium. The likely result being two, parallel global computer inter-networking systems... which is pretty much what Google CEO Eric Schmidt predicted.

Read his full explanation here...
Posted by Tom Termini at 11:38 AM No comments:

Has the Robot Future Pulled Up to the Curb?

In a milestone for the self-driving industry, Waymo said it will open up its autonomous ride-hailing service to the general public in metro Phoenix, Arizona. In the upcoming weeks, people in the Phoenix area can hail a taxi like they would a Lyft or an Uber ... then hop in a car that’ll know where they want to go to be taken to that destination. But... the car will be driving itself! 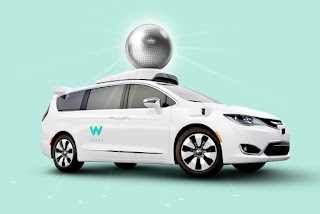 Waymo, Alphabet’s self-driving vehicle division, has been testing its cars in the Phoenix area since 2016, diligently upgrading the technology and capacity to eventually roll out a fully fledged commercial service.  Hundreds of testers have been experimenting with the Robot Taxi service through the Waymo One app.

The announcement expands the current program in two ways:

To deal with the current pandemic, Waymo is limiting the scope of its service by restricting it to fully driverless rides. It is installing barriers in its vehicles so down the road it can plunk a human safety driver in the front seat and address a larger geographical market.

Other car companies -- namely Tesla and GM -- are racing to introduce driverless vehicles, but Waymo has recently pulled away from the pack. This spring, it raised $3 billion to accelerate the rollout of its commercial service, using money for the first time from a company not associated with Google.

OS X is built on a UNIX kernel... will Microsoft Windows be, too?

Open-source software guru Eric Raymond has authored an argument that the presence of Linux on the desktop is imminent because Microsoft will soon run out of options to improve Windows.

In his on-line html-based journal, Raymond argues that the porting of the Edge browsers to Ubuntu is a harbinger of the future. Microsoft developers are now embedding features in the Linux kernel to improve Windows System for Linux (WSL).  This points in a potential technical direction -- one influenced by Microsoft’s revenue stream and how has changed since the launch of its cloud service in 2010. Look at Proton, the emulation layer that allows Windows games distributed on Steam to run over Linux.

According to  Raymond, Microsoft Windows becomes a Proton-like emulation layer over a Linux kernel, with the layer getting thinner over time as more of the support lands in the mainline kernel sources. The economic motive is that Microsoft sheds an ever-larger fraction of its development costs as less and less has to be done in-house.

A big advancement at Apple, when Steve Jobs returned, was the transition to OS X, built on top of the NeXT operating system core of BSD Unix.

Posted by Tom Termini at 6:22 AM No comments:

Ever the optimist, the founder of Microsoft writes: because we will be able to immunize against the disease, governments will be able to lift social distancing measures. People will stop having to wear masks. The world’s economy will start running again at full speed.

Bill Gates writes that the virus won't go away soon... even with a vaccine. He does predict that likely more than one vaccine will be available by the early part of 2021, but dealing with the pandemic would first require the capacity to make enough of the various medicines, and then ensure a global reach to deliver dosages.

"Right now," he said, "most of the world's supply of COVID-19 vaccines is slated to go to rich countries." Those countries at the other end of the scale are not so lucky: "As things stand now, these countries will be able to cover, at most, 14 per cent of their people."

Removing the ethical / moral considerations out of the equation, the result, according to Gates, is the virus will continue its rampage through large parts of the globe -- wealthy nations risking reinfection because, after all, not everybody will line up for vaccination. "The only way to eliminate the threat of this disease somewhere is to eliminate it everywhere," insisted Gates.

Posted by Tom Termini at 6:17 AM No comments:

Public Trust is the company's effort at broadening the scale and scope of their storytelling on the issues of around conservation. This new feature film aims to raise awareness of federal land being turned over to oil drillers, miners, and others who’d destroy our wild refuges. Patagonia, famously declaring that the POTUS has stolen our lands, back in 2017, produced this film to raise awareness of the kleptocracy-in-progress with the present administration.

The brand is launching a feature documentary on YouTube called Public Trust, which makes the case for protecting American public lands -- and how extractive industries are actively working to shrink and privatize them.

Posted by Tom Termini at 3:09 AM No comments: