As we read over at some military news site,

DARPA's AlphaDogfight trials have officially come to a close with Heron Systems' incredible artificial intelligence pilot system defeating not only its industry competitors, but going on to secure 5 straight victories against a highly trained U.S. Air Force F-16 pilot, without the human pilot scoring a single hit.

This should not be confused with the Intelligent Flight Control System (IFCS), a next-generation flight control system designed to provide increased safety for the crew and passengers of aircraft as well as to optimize the aircraft performance under normal conditions. What is most valuable to 99% of the rest of the world -- outside of military applications -- is regarding passenger planes which fly autonomously. Software would have to be capable of handling emergency situations. At present, modern airliners do a good job of flying automatically until something unexpected happens. At that point, a pilot takes control and typically resolves the problem. Very rarely, though, a pilot must act to save the aircraft from catastrophe.

There's more details about autonomous flight over at the I-triple-E, Application of AI Methods to Aircraft Guidance and Control.

Posted by Tom Termini at 1:36 AM No comments:

Another Test of Universal Basic Income

This month approximately 100 or so Germans will receive a form of universal basic income every month for three years.

Germany is about to become the latest country to trial a universal basic income, starting a three-year study of how it affects the economy and recipients' well-being. As part of the study, 120 people will receive 1,200 euros, or about $1,430, each month for three years -- an amount just above Germany's poverty line -- and researchers will compare their experiences with another group of 1,380 people who will not receive the payments.

Read more about the study at Business Insider. It is being conducted by the German Institute for Economic Research, and has been funded by 140,000 private donations. All participants will be asked to complete questionnaires about their lives, work, and emotional state to see whether a basic income has had a significant impact. A pro-basic-income lobbying group called Mein Grundeinkommen is funding the experiment. The group has used donations from its supporters to fund monthly 1,000-euro payments for 668 people since 2014.

Another measure to reduce the spread of Covid-19 infection, one of Japan's largest door-to-door delivery service companies, Yamato Holdings, and the government-owned courier firm Japan Post is testing delivery robots in Tokyo.
Hopefully robots will help contain the spread of the coronavirus — while alleviating the shortage of delivery drivers. 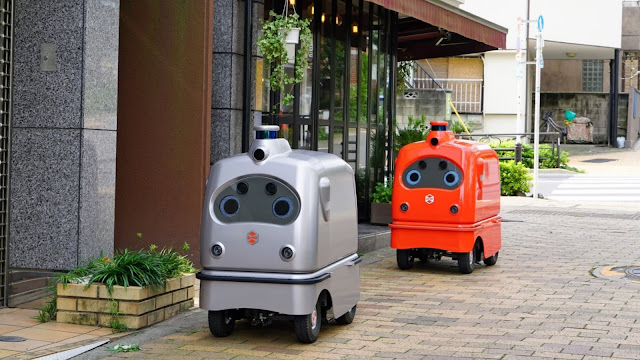 The government wants to control access to the Internet. This is a very bad idea, opposed to all the principles it was founded on.

Posted by Tom Termini at 8:39 PM No comments:

Implementing DevOps could save your organization big money...

A primary purpose of DevOps is to release software builds at better quality with higher frequency. Automation in DevOps should be embraced to realize this objective, without introducing a negative effect into the quality or frequency of software released to end-users. Based on an analysis conducted by Forrester Consulting on behalf of GitLab, the report concludes organizations can save as much as $3.7 million by reducing the number of DevOps tools they need to acquire by a factor of four.

The report also claims organizations can also see a 12x increase in the number of revenue-generating application releases in a year, resulting in $12.3 million in additional revenue, while at the same time reducing code defects to generate more than $16.8 million in savings. Overall, the report says there is a 407% return on investment (ROI) in the GitLab platform.

As a global economic downturn brought on by the pandemic unfolds, many organizations are focusing on costs. Being able to accelerate the rate of application development -- and deployment -- should be part of digital business transformation initiatives. The more business processes become automated, the less expensive to maintain. This is obvious giving the more dependent organizations are becoming on software. But many leaders are navigating ways to reduce costs without forcing every member of the team to standardize.

Russia is Expert at Online Disinformation

At her Thursday keynote, Stanford Internet Observatory's research manager Renee DiResta explained how Russian military intelligence – the GRU – and the private Internet Research Agency (IRA) were putting the likes of China to shame. Security companies and government agencies have good reason to move their focus from Beijing to Moscow, she warned.

The basic methods of hacking public opinion are fairly simple, DiResta explained. Fake accounts generate content and spam it out on social media to amplify the message. If enough real people pick up and the posts go viral the mainstream media kicks in and amplifies the desired message still further.

In Russia's case, it spreads divisive material, stolen information, and fake news in an attempt to turn Americans against each other, sour civil society, sow doubt, and create distractions, leaving people unsure of what's really going on. This worked. In China's case, it tried to make people like China. This didn't work.

Posted by Tom Termini at 6:26 AM No comments: