Emulate the Dutch for Healthy Citizens, Higher Quality of Life

Cycling in the Netherlands is extremely popular -- for a long time, except for a brief period post-war. The BBC has an interesting look at why bicycles are so popular in the Netherlands. This method of transport (and source of recreation) accounts for 27% all trips nationwide, and up to 59% of all trips in Dutch cities; so says Yes Magazine.

What can other countries adopt to help citizens become more fit, lower domestic reliance on petrol, and reduce congestion and pollution? In many countries bicycles, as a means of transportation, are largely ignored. Those who use bicycles to get around are often required to choose between uncomfortable, unsafe routes that go directly to their destination, or indirect, roundabout routes that provide better safety. 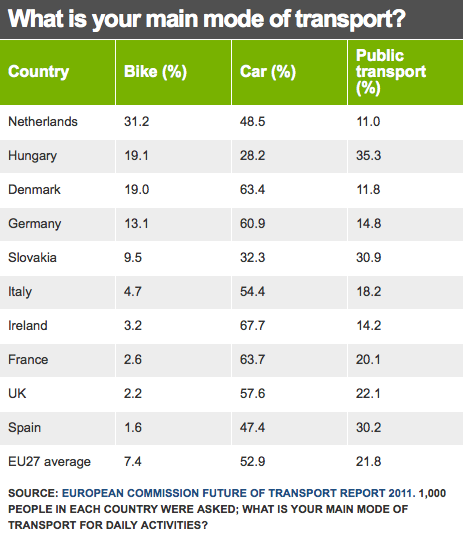 It seems in the Netherlands, the government is adept at providing direct, well-marked routes for bicyclists. This makes it easy to avoid busy, arterial roads with high speed traffic. This is a worthwhile step planners can take increase the number of people bicycling in DC, Dublin or elsewhere. Routes that are more direct for bicyclists provide further incentives for people to leave the car at home.

Luckily, if you want to visit European countries that are bicycle freiendly, Google has the tools you need -- especially now that they have added bike routes to many maps. Google has worked with partner organizations to map out the best and up-to-date bike routes and has added hundreds of miles of bike paths through Google Mapmaker.
Posted by Tom Termini at 7:07 AM