With Tesla opening a manufacturing facility in Deutschland, and Ford aiming to only sell electrified vehicles in the coming decade, it seems German auto makers are under pressure.

Seven years ago, Mathias Döpfner was at a ceremony celebrating Tesla founder Elon Musk. Döpfner, the head of German media company Axel Springer, was seated next to a CEO of one of Germany's biggest carmakers, and he turned to him and asked, "Isn't this guy dangerous for you?"

As he later recounted, the CEO shook his head. "These guys in Silicon Valley, they have no clue about engineering, about building really beautiful and great cars," the CEO told him. "So we don't have to worry."

At the time, the value of Tesla's shares was $23 billion, a quarter of that of Germany's largest carmaker, Volkswagen. But times have changed. Tesla's market capitalization has skyrocketed to more than $700 billion, more than three times that of Volkswagen, Daimler and BMW — Germany's three largest automakers — put together.

There have been hiccups: Tesla was ordered to suspend preparations for a car factory in Germany after a successful court injunction by environmentalists in December of 2020. Mercedes-Benz and Audi are introducing electric cars so as to defend dominance of the luxury market. 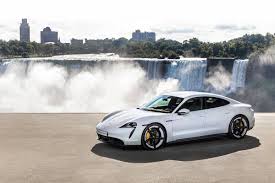 Over at the NYT, a reporter wrote about another competitor to Tesla -- the p-wagen:

The Taycan, a four-door sedan that Porsche recently let me try out at the Hockenheimring racing complex south of Heidelberg, provides an early example of what the German automakers are capable of. The car, with a starting price a little over $100,000, can blast from zero to 60 miles per hour in well under three seconds.

So, it happens, can the Tesla S. But tests by Car and Driver confirmed Porsche’s assertion that the Taycan can replicate those blastoffs 10 times in a row, unlike the Tesla, which becomes sluggish with repeat use as the battery wears down. Porsche has found a way to maintain explosive acceleration even when the battery is not fully charged.

During an hour of all-out driving on Porsche’s serpentine test track, egged on by a Porsche instructor who encouraged me to probe the car’s limits, the Taycan stayed glued to the asphalt like a roadster and never showed signs of fatigue. I ran out of juice before the car did.

One side-effect, and a positive one, is that Germany is becoming a hub of battery technology.
Read more at NPR...