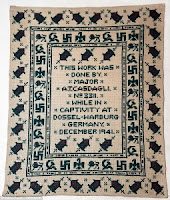 I have always thought the British were totally awesome in WWII, standing up to ultimate evil. Even when the odds were against them, and they were on their own. I love stories of how they flipped the proverbial bird to the Nazis whenever possible.

In 1941, a Major Alexis Casdagli was taken prisoner by the Germans and sent to a series of prison camps. He practiced needlepoint to pass the time; this piece he created in December 1941 looks innocent enough, indeed it looked so innocent that guards allowed him to hang it on the walls at all the camps he stayed in. However the piece contains two subversive messages coded into the borders, messages that if they had been discovered by guards would have put his life at risk.

So taking time to learn Morse Code can pay off...