In SimCity, an old-school Mac game where you build a city through urban planning, zoning, and setting the conditions right for the growing population of Sims, one quickly realizes that roads won't suffice for long.

The original SimCity was met with skepticism when SimCity creator Will Wright came out with a game that was focused on create, and game-play could continue virtually indefinitely, at a time where most games of the time were designed to last mere minutes and end in fiery explosions. SimCity is all about city planning, where you play as an omnisient and civic-minded honorific of Mayor, charged with managing the growth and planning of a simulated metropolis. 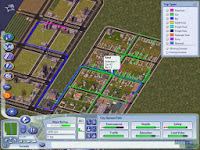 Here in the Washington DC area, the Wiehle-Reston East Metro is now open, after months and months of delays the Silver Line has begun service. Soon it will link one of the major airports to the city center.

In the game, we learn the secret to minimizing traffic congestion is a well-planned mass transit system that covers every building in SimCity. With a multitude of options, one can leverage mass transit many ways. One good way is to ensure at least one city in your region has a department of transportation module attached to the city hall. This is how WMATA should function, but, as the organization must content with three jurisdictions — and fight for funding from four sources, all competing — the mass transit mangers for Washington’s subways and busses have a tough situation to deal with. Marylanders don’t want to pay for the Silver Line. People in Northern Virginia don’t want to pay for the Purple Line (let alone law makers in Richmond). And nobody wants to pay for DC.

It wasn’t long ago that Metro was searching for a long-term fix. Of course, I advocate pursing a model like the Paris metro, one of the oldest subways: no more escalators. Save money on fixing the hundreds and hundreds of them, by shutting them off. Turn them into stairs, for the most part. That solves a huge maintenance issue, and perhaps will lead Washingtonians to walk more, and slow down obesity problems.