Lest We Forget - We Have Walked on the Moon

On July 20, 1969, astronauts Neil Armstrong and Buzz Aldrin became the first humans to walk on the moon -- go Team America! The scope of NASA's Apollo program seems staggering today. President Kennedy announced his moon goal just four years into the Space Age, but the United States had not even launched a human into orbit yet. Amazingly, just eight years later... 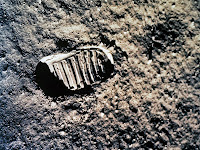 Twenty-four U.S. astronauts have traveled to the Moon. Three have made the trip twice, and twelve have walked on its surface. Apollo 8 was a lunar-orbit-only mission, Apollo 10 included undocking and Descent Orbit Insertion (DOI), followed by LM staging to CSM redocking, while Apollo 13, originally scheduled as a landing, ended up as a lunar fly-by. Apollo 7 and Apollo 9 never left Earth orbit. The inherent dangers of manned Moon expeditions as seen with Apollo 13 -- and of course the disaster of Apollo 1, the first manned mission of the U.S. The planned low Earth orbital test of the Apollo Command/Service Module never made its target launch date of February 21, 1967 because a cabin fire during a launch rehearsal test on January 27 at Cape Canaveral Air Force Station Launch Complex 34 killed all three crew members—Command Pilot Virgil I. "Gus" Grissom, Senior Pilot Edward H. White II and Pilot Roger B. Chaffee—and destroyed the Command Module.